Warning: If you are easily offended by bad language I suggest to go elsewhere to read blogs.

Ok so I’ve been doing this shit for a while now and TBH I expected nothing but crap sales stats for my latest game Jetpack Something because I did zero marketing. And I wasn’t disappointed!

A couple of posts on some forums and a picture of the dog doesn’t really count as marketing.

Oh and when I say sales stats I mean Free downloads. Yes I can’t give fucking games away these days. Anyway the “sales” stats work out roughly as follows.

I make about £20 a month per 1000k downloads. I have four revenue streams where are iAds, Google Ads, In App Purchases, and Incentivised Ads with Unitys Everyplay. The break down is roughly as follows

So if I make 50k downloads then this will earn 1k a month. Sadly I don’t think thats going to happen unless I put it on to Android and frankly I can’t be arsed.

Well, with no comments on my forums posts other than the friendly devs on Unity forums and no reviews from anywhere in the world on the iOS platform and with only a couple of extra followers on twitter / Facebook (despite giving incentives for these activities) I’ve resigned myself to the fact that its probably not as good as I hoped it was going to turn out.

Thats the last two games I’ve put out under my own label that have bombed and its down to a couple of things. Firstly they probably weren’t that great. Not bad I think, but not great. And secondly they had absolutely no marketing whatsoever. I think an important question I’ve got to ask myself is would I download either of my last two games. Sadly the answer is NO! Not because they are shit, but because they just don’t do it for me.

I’m currently doing a lot of work for a different company so my time as Plastic Cow Games is very short but what time I can spare is going to be put towards creating something I can be proud of. Something I WOULD buy right now if it was available. And something I hope others are also going to buy. After all, if I wouldn’t play my games why should I expect anyone else too.

So what is it? Well here’s an early screen shot. Obviously it needs a lot of work ? 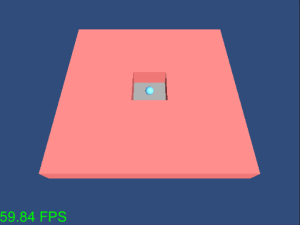 In my best Aussie sex pest accent – Can you tell what it is yet ?