I’ve decided to try something a little different for my next game. I’m a bit fed up making the same old shit. That being small casual games like Jetpack Something and Ninja Pig in order to try and earn enough to make the next one.

The next one is going to be a Squad Turn Based Strategy in the same mould as xCom and its probably going to be PC/Mac before I even look at mobile. I’ve made a start on the basics which is a grid based path finding solution that can traverse different floors via ladders at the moment, allow for doors and windows in that you can go through them and a two action point system like xCom. Next step is either look at a see through wall shader or destructible environments.

Anyway here’s a screen shot of the prototype so far. 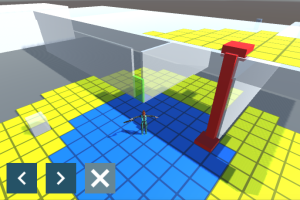